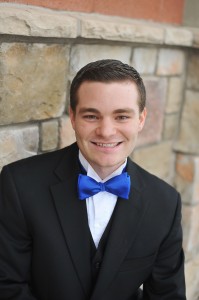 Congratulations to Tyler Boehmer for taking first place in the Utah Valley/Salt Lake City Quimby Regional Competition for Young Organists (RYCO). The competition was held on March 14, 2015, at St. Ambrose Catholic Church in Salt Lake City. Tyler will compete at the Regional Convention in San Diego, in June, 2015.

Tyler began his musical studies on the piano at the age of four, quickly becoming proficient. He began studying organ at 14, and fell in love with the complexity of the instrument. Tyler currently studies organ performance at Brigham Young University, where he has excelled under Dr. Don Cook and serves as organist for the BYU Men’s Chorus. He performed his first solo organ recital just one year ago. Tyler says that someday he wants to become a university professor.