We hear from Sarah Maxfield, 16, who was able to attend the Haarlem International Organ Festival this summer (2016). Sarah is also one of the winners of last spring’s UVAGO Youth Scholarship program.

Hi! My name is Sarah Maxfield; I turned 16 in June. I’ve played the organ for four years. This summer, as part of my musical (organ) education, I went to Holland for the Haarlem Orgelfestival. This was an amazing experience for me on several levels, because it taught me how to work hard and set goals to reach my dreams.

Back in December my amazing mom was looking for organ summer camps for me, and this one kept popping up. I honestly didn’t think that I would get in, because I had never been out of the US or Canada for anything, and I didn’t think that my skill set at the time would get me in. But I decided to try anyway.

In January they sent us the list of music I had to prepare to send in as a recorded audition. I needed to learn a Bach trio sonata, and a piece from Messiaen’s “La Nativité.” I had never in my life played that music. I met many organists who did not believe that I would be able to learn these pieces and perfect them in the time given me. So, I stepped up my game. I increased my practice time to twice the amount I was used to. I was dedicated to getting in, so I practiced the same two pieces for seven months (and somehow managed to still like them). 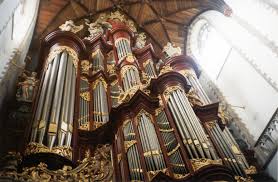 The audition was due two months after the music had been released, and, as I was between teachers, I had an amazing experience of going to different teachers to learn different viewpoints on the pieces. We recorded, and recorded, and recorded at the University of Utah and also at the Cathedral of the Madeleine, but I wasn’t ready. So, finally, days before the due date, I recorded in my teacher’s office at BYU on a small practice pipe organ. Then came the rigorous process of deciding which take was the best recording to send in. This process was hard, because they all sounded so similar. Because of that, my mother turned in the wrong recording, and had to send an apology letter and the correct recording later.

Finally, the day came that we got the results. I did not get in, except to be a passive participant, which meant I could not play. They had to choose eight young talents from the world, and I was the ninth best. Instead, they told me that I could come, but only to watch. My mother and I decided to go anyway, and I had the opportunity to play on three of the organs, even though at first they said there would be no time for me to play. My favorite by far was St. Bavo’s 17th-century organ, which had been played by Mozart. If I had decided not to work, or not to go because I didn’t believe I would be able to play, I would have missed out on a lot of amazing experiences.

Miranda Wilcox has been in England since January 2016 leading a study abroad and doing research.

The first week in York, I saw a sign announcing an organ recital series at St. Columba’s United Reformed Church down the street from where I lived. At the first recital I mustered the courage to ask the organist Nigel and Reverend Allison if I might practice on their lovely instrument. They were incredibly generous and welcoming and agreed that I could practice on “Mildred,” the 1907 Lewis organ. Mildred has a warm, rich tone with gentle flutes and robust principles. Even though there are no mixtures or mutations, the organ is quite versatile, and I enjoyed playing Dupre and Bach. I am very grateful to the St. Columba community for the opportunity to practice regularly while I was in York.

For the last organ recital in the six-week series, Nigel wanted it to have the feel of the British Proms. I happened to be practicing the organ when Nigel and his wife arrived to decorate the night before the recital. They draped strings of Union Jack across the sanctuary. I helped them distribute crackers, whistles, and streamers among the pews. Nigel thinks organ recitals should not be so serious and wanted “a bit of silliness.” Simon Lindley, the Leeds city organist and a consummate performer, played a rousing program of “British” tunes. He ended by inviting the audience to sing “Holy art Thou” (while he played Handel’s Largo) and “Jerusalem.” As we sang, the audience got into the patriotic mood and began waving flags, blowing kazoos, pulling poppers, and throwing streamers. It was unlike any organ recital I have ever attended.