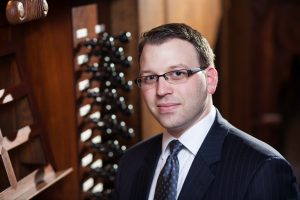 Joseph Peeples was recently appointed as a new organist at Temple Square. He will join organists Richard Elliott, Andrew Unsworth, Brian Mathias, Bonnie Goodliffe, and Linda Margetts in performing organ recitals and playing broadcasts and performances with The Tabernacle Choir.

“We warmly welcome Joseph to the organ staff and look forward to his musical contributions on Temple Square,” Elliott, the principal Tabernacle organist, said in a press release.

Peeples is well-prepared for his appointment. He earned his master’s degree in organ performance from Brigham Young University where he studied with Dr. Don Cook and Dr. Douglas Bush. He then earned his doctorate from Indiana University Jacobs School of Music, where he also studied organ.

Since then he was the organist at the Speedway Christian Church in Indiana and the university organist at California Lutheran University, where he taught applied organ, keyboard harmony, and music appreciation. At the time of his new appointment he was serving as organist for the First United Methodist Church in Santa Barbara. He has also taught a variety of music courses at Pepperdine University, Indiana University, and Brigham Young University.

He will begin his duties at Temple Square in June.

Prelude and Fugue in A Minor, BWV 543 —— Johann Sebastian Bach