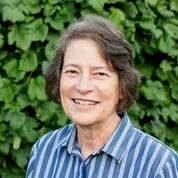 Dorothy Jensen comes from Whittier, California. She graduated from Utah State University with a BA in Child Development and Elementary Education (with minors in music and physical sciences) and an MA in Family and Child Development. She taught early childhood courses at Scripps College (Claremont, California) and Ohio State University, and then taught kindergarten for one year in Columbus, Ohio, and 21 years at Cherry Hill Elementary School in Orem, Utah. She is married to Richard Jensen, and they are the parents of six children.

After Dorothy retired in 2014, she started to fulfill something that she had always wanted to do: play the organ in the temple. Dorothy had taken piano lessons from age six through sophomore in college, but was not a hymn player and did not know anything about playing the organ. She started taking organ lessons from Sheri Peterson in January 2015 and was accepted to play in the Provo Temple in early 2016. She really loves serving there!

Dorothy became involved in UVAGO because Sheri was chapter dean when Dorothy met her. Sheri soon had Dorothy helping with the Pipe Organ Encounter sponsored by our chapter in 2016. She is sure she learned more than the teenagers she taxied to organ lessons, concerts, organ crawls, etc. It was a new world to her, and she is enjoying the continued acquaintances and opportunities for learning.