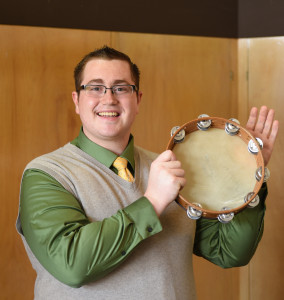 Congratulations! You have found the photo of Quinten playing the tambourine. E-mail him at: with the location (member directory). Your name will then be entered into a drawing for a fantastic prize. The contest ends on September 16, 2016, the date of the chapter's opening social.

Quinten received his Bachelor in Music, with an emphasis in Organ Performance, from Brigham Young University, where he studied with Don Cook and Douglas Bush. He previously studied with Christian Huebner and Johnathan Biggers. He currently serves as organist at Orem Community Church in Orem, Utah, and as a ward organist for the Church of Jesus Christ of Latter-day Saints. Also, he composes and arranges sacred music.

His interest with the organ began at thirteen years of age. He has continued to grow and develop his love for sacred music throughout his life. He hopes to continue onto graduate work in sacred music.

He is active in the Utah Valley chapter of the American Guild of Organists, teaching at Super Saturday workshops, and was elected dean of the chapter for the 2016-2018 term. As chapter dean, Quinten will work closely with chapter officers and standing committees and serve as primary liaison with district and regional leaders.