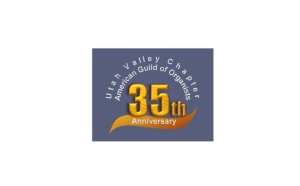 In the fall of 1979, a group of organists gathered at the home of Ephraim and Verena Hatch in Provo for the purpose of forming a local chapter of the American Guild of Organists. The chapter was named the Utah Valley Chapter, officers were selected with Gerald Dick as the first dean, and a petition was then sent to National Headquarters for official chartering of the chapter. The charter was issued October 9, 1979; it was signed by Roberta Bitgood, National President of the American Guild of Organists.