The video below was recorded by Scott Mills on May 9, 2013–the last German organ tour of Doug’s. The video was a well-kept secret until it was shown at the recital to the surprise of almost everyone.  Doug played Johannes Brahms’ Organ Chorale Prelude, Opus 122, No. 11, O Welt, ich muss dich lassen (O World, I Now Must Leave Thee)–a poignant foreshadowing of what was to befall Doug five months later.  Doug is playing the Knauff organ at St. Phillippus und Jakobus Kirche in Geisa, Germany.

Below is Scott Mills’ statement he gave just before the video was shown:

I had always wanted to go to Europe on a tour with Dr. Bush and had made two or three attempts over the years. When the e-mail came that he would be giving his last tour, I was determined to go with him to Germany. This would be Doug’s 65th tour. Twenty of us were on the tour, which left on April 29, 2013, and returned on May 11. On Thursday, May 9, we travelled through the Thuringen forest to the little town of Geisa to visit the historic Knauff organ, which was originally built in 1846. This was the last organ that we played on our tour. Doug wanted us all to experience this Mendelssohn-style instrument. After all of us had a chance to play, Doug concluded by playing for us. I was able to capture a video of his playing. Little did I know then the significance of what I was recording. 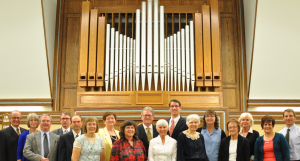